Loop Heat pipes are two-phase heat pipes which use capillary action to conduct heat from the hot spot completely passively to a condenser or radiator. Compared to conventional heat pipes, loop heat pipes offer some advantages. First, LHPs can bridge very long distances of up to several meters. Secondly, this type of heat pipe can operate completely independent of gravity. This fact opens up many fields of application, for example in space travel. Loop heat pipes are used in most communication satellites and cool sensitive electronic components and systems.

The circuit in the system is created by the effect of heat on the evaporator, which heats up the liquid inside and causes it to evaporate. The rising pressure causes the liquid to move through the steam pipe in the direction of the heat sink. There it transfers the absorbed heat to the environment, cools down and flows back to the evaporator via a pressure compensation chamber. There are two types of wick in this chamber which build up a capillary effect and ensure that the heated part of the circuit is constantly supplied with liquid.

The advantages of such a system are obvious: The necessary technology is simplified by the passive movement of the liquid. The pipes are flexible and bendable and can be laid or processed easily. In addition, heat can be transported over long distances – no matter in which inclined position the circuit is, a flow and a perfect function are given in every position.

The planning of a loop-heat cycle involves considerable effort. We are happy to assist you with our knowledge and expertise during the implementation of your project.

Compared to loop heat pipes, conventional heat pipes do not have a continuous circuit with clearly separated components such as evaporator, condenser and expansion tank. Heat pipes are therefore much more compact in their design and can be used even in the smallest of spaces. They ensure efficient heat dissipation and work completely passively. Inside, these tubes are equipped with a copper braid, which results in a capillary effect. As a result, liquids such as distilled water flow under increased pressure from warm to cold and thus contribute to the cooling of sensitive components.

The shape of our heat pipes is freely selectable and is manufactured according to customer drawings. In addition, care is taken to check the component for possible optimizations and to implement these in consultation with the customer.

The effect of heat on the evaporator leads to evaporation of the liquid, which constantly flows through a wick mesh. The resulting vapour passes through a pipe to the heat sink and condenses at this point. The cooled liquid flows back into a compensation tank, where it is absorbed by the wick and flows back into the circuit. The cooling capacity achieved is higher than with conventional heatpipe systems. The closed circuit allows application even in the absence of gravity and over long distances.

The use of liquid-filled heatpipe heat sinks is necessary in a cooling circuit in order to ensure proper function. This heat sink, also known as a radiator, absorbs the heat energy of the liquid and releases it into the ambient air through a branched network of individual small tubes or fins. The thermal conductivity of the material also plays a role, which is why copper is generally used.

Specifically tailored to your project, we offer a wide range of heat sinks. 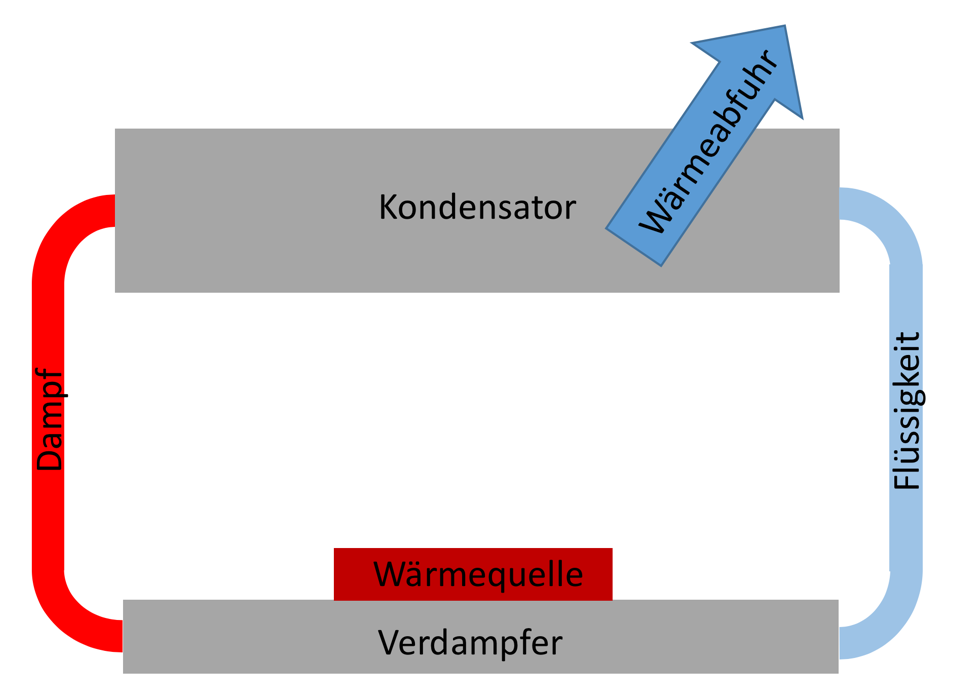 Already know what you are looking for?
Visit our shop.